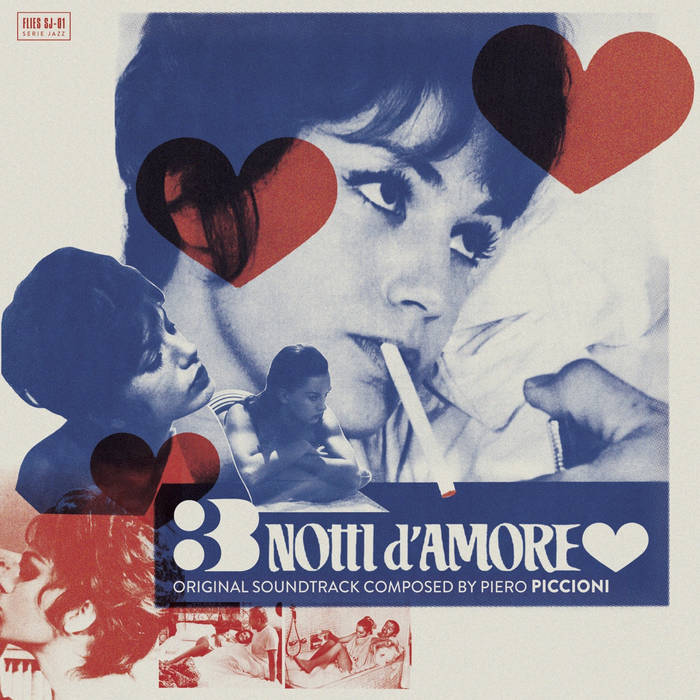 Four Flies launches its new jazz series dedicated to top Italian soundtracks from the 1960’s with this extraordinary work by Piero Piccioni: 3 NOTTI D’AMORE (3 Nights of Love). Originally released in 1964 on CAM – CMS series, this record had a very limited pressing, and is considered one of the grooviest and jazziest scores composed by the legendary Italian maestro. Thanks to the support of an exceptional big band, Piccioni shapes a unique cool style, supported by a truly exotic and percussive rhythm section (“Come on Rome”, “Just For Fun”), full of charming flute phrases (“The Easy Way”) and baritone sax passages (“Pop’s Lolly”), and beautifully played by the two great soloists, Gino Marinacci and Gato Barbieri. Piccioni himself plays the piano on all the tracks, and created a magnificent, dynamic and sophisticated soundtrack. Pressed for the first time in its integrity, this soundtrack includes some missing numbers from the original record, and presents others in their extended full versions, such as “Sally’s Surf” (compiled in the essential Easy Tempo series). A superb album featuring marvelous tracks – from bossa to pop-jazz – this original soundtrack also features a couple of tracks by Carlo Rustichelli; two dreamy, sensually vocalized melodies. One of Piccioni’s lesser known masterpieces that truly embodies that golden time period, and a real beauty for every 60s jazz lover.