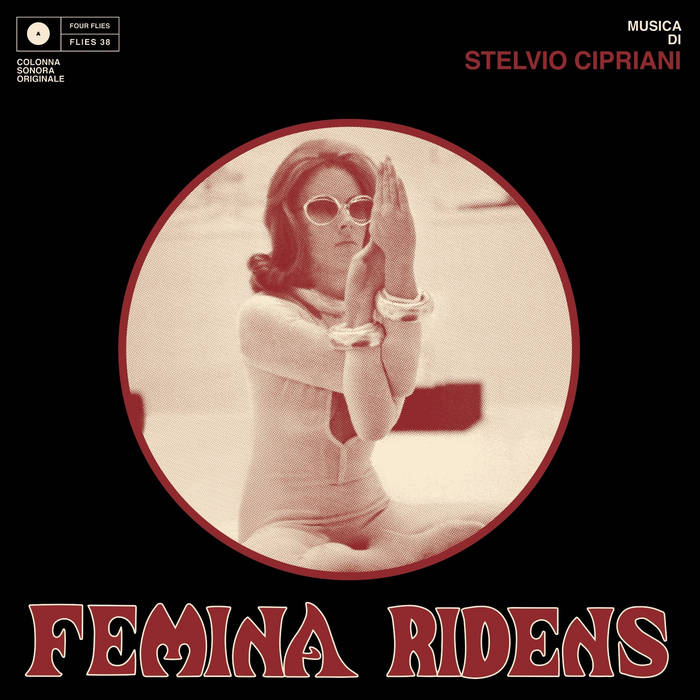 recorded by Sergio Marcotulli at RCA Studios on 5/5/1969

If a jewel were to be chosen amongst the more than three hundred soundtracks that Maestro Stelvio Cipriani has composed during his long and prodigious career, that choice would probably not fall on the super classic and hyper known ANONIMO VENEZIANO(the box-office and hit-parade champion who triggered the international fame of the Roman musician), but probably on his previous and less celebrated FEMINA RIDENS – perhaps the most iconic of his soundtracks, along with MARK IL POLIZIOTTO. This work is undoubtedly one of those titles that best represents the spirit of Italian golden age film music, and the original LP, published on CAM series SAG - 9017, is at the very top of every collector’s most wanted list.

The film, directed in 1969 by Piero Schivazappa, is a feminist parable that blends eros perversion, black comics, and Pop Art. And its mood, halfway between cold and playful tones, is perfectly underlined by Cipriani with a soundtrack that fits flawlessly to the dreamlike, grotesque, and sentimental images, combining classical music and orchestral pop, baroque jazz, spaghetti western flavors, psychedelic blues and lounge vibes – all emphasized with sumptuous arrangements that still sound contemporary. A jewel like "Mary's Theme" is an immortal, timeless track that has been recently sampled by hip-hop producers, and is a demonstration of the eternal modernity of the finest Italian cinematic sound.

This reissue fills a serious gap, finally bringing to the forefront an iconic soundtrack that has remained inaccessible on wax far too long. And it does so in the best possible way, starting from the original master tapes preserved in the CAM archives, from where it was possible to locate an unreleased track (added at the end of side B), as well as allow for an enhanced version of "Chorus and Brass Fugato", whose original edit has been improved and extended here. And if that weren’t enough, for all you discerning collectors, as well as DJs, Four Flies is also releasing an extra 7-inch record which includes the two most danceable tracks on the entire OST!